Since 1992, when 32 teams participated in the first Donosti Cup, more than 80,000 players from 60 different countries have taken part in this tournament that has become the biggest in the South of Europe

The first edition of the Donosti Cup was hold in the month of August of the year 1992 and it had 32 participating teams. Nowadays, this is the biggest Tournament in the South of Europe and one of the larger ones in the world.

The Donosti Cup saw the light in August 1992, a very special year in Spain. In Barcelona, the Olympic Games were celebrated, the EXPO was celebrated in Sevilla, and the Tour of France left from San Sebastian. The tournament was started by the sports agency Ari Sport formed by Javier García, Iñaki Egües and Iñigo Olaizola. The last one was the first director of the Donosti Cup, the same post he has nowadays. After two years managing the participation of local teams in Italy, France and Holland tournaments, Iñigo Olaizola proposed to his partners the possibility of organising in San Sebastian a similar tournament to the ones they were promoting in Europe, because San Sebastian was a perfect scene to welcome an event of these characteristics. For that purpose, a very special year was chosen: 1992. That year, there were the Olympic Games in Barcelona, the International Exhibition in Sevilla and the Tour of France left from San Sebastian. Once the year was chosen, the dates were needed to be set. And after considering many options, the week of the festivities of San Sebastian was chosen: one week in the month of August where the city is full of life, activities, celebrations… And of tourists. This choice was positive because participating teams would know San Sebastian when the city wore its best clothes. But they realised very quickly that the tourist avalanche during those days would be a problem when getting enough accommodations for an event that may attract more participants each year.

The 1st edition was hold from 11 to 15 August, and 32 teams from 3 different countries (Spain, France and Italy) participated. The Organisation waited a higher participation but they soon realised that the chosen dates were not the best ones for football clubs because most of them were still on holidays, and that it was needed to start the promotion of the event more in advance. In order to avoid the lack of teams, well known teams like Real Sociedad, Athletic Club and Osasuna, were invited to the tournament; which would mean a great attractive for the rest of teams. The Opening Ceremony was hold in the Beraun Stadium and after the parade of all the participating teams the junior teams of the Real Sociedad and the Athletic Club played a game against each other. Iñaki Alkiza, President of the Real Sociedad, made the honour kick. The list of winners of that first edition would stay for the memory: The Real Sociedad won the junior category, Osasuna the 16 and 12 categories, and the Parla Football School the under 14 category. We want to outline that in that edition, 5 players that would play in the professional football participated: Xabi Alonso, Mikel Arteta, Mikel Alonso, Pablo Orbaiz and Aitor López Recarte.

Next year, the tournament was hold in July because the coincidence with the week festivities of the city meant an important incentive but the hotel capacity was very reduced. Since then, the Donosti Cup always started the first Sunday of July. This second edition of the tournament grow a little bit (40 teams) but it was more international and the in third edition there were American and Asian teams for the first time and a girls’ category was created.

It was on the fifth edition when the tournament reached the 100 teams a figure that seemed a record. 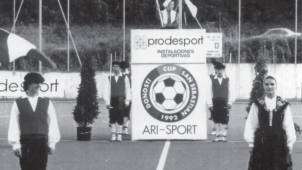 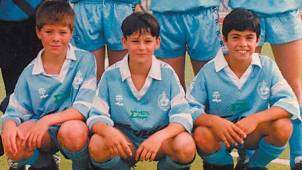 The Donosti Cup work in favour of childhood was recognised by UNICEF in 2008, when the Donosti Cup was awarded with the National Award in favour of Sports. And the touristic promotion labour was recognised next year by the San Sebastian Town Council with the award of the Gold Drum, the highest award that the city of San Sebastian gives, to its director Iñigo Olaizola.

In the XIX edition, the organizers started, for the first time in the history of the tournament, an own drumming group of people with the participation of the Donosti Cup staff, families and friends. The first edition had 89 members, 45 men and 44 women. That year, the tournament had more than 300 teams from 18 different countries. In the XX anniversary, a group of Bolivian native mothers, leaded by Xabier Azkargorta, ancient selector of that South American country, visited the Donosti Cup.

In the twenty-first edition, the tournament gathered 392 teams from 25 countries, 50 teams more than the previous year. The girls’ football also beat a record, with a total of 80 teams representing nine countries. In the twenty-second, the presence of the Al Sader team stood out, the first Iraqi team to participate in the Donosti Cup, made of war orphans. Their participation took a special importance because the previous year their players could not play the tournament due to an attack close to the Istambul airport that block them from travelling to San Sebastian.

In the 23 edition, one year after, the Donosti Cup beat its own participation record with 423 teams. Among them, 86 girls’ teams of a very high level and participants from so far away countries like Australia or Hawaii. In 2015, Tico Tico stars attracted all the attention with an infectious joy. It was the first time that these ten children from an orphanage of Mozambique left the country. In 2016, nothing but 532 teams participated, about 8,500 players from 25 countries. Yuwa girls returned to the tournament and the Wukro girls travelled from Ethiopia to Donostia to enlighten the street with their colourful costumes. This year, two promises of La Liga, Ander Barrenetxea and Nerea Eizaguirre, became champions of the Donosti Cup.

In the 26 edition, 4,000 football players from 582 participating teams, coming from 26 different countries, played the Donosti Cup. United States was the larger foreign delegation, with 52 participating teams. In 2018, due to the Anoeta Stadium works, the Opening Ceremony, the Fan Zone and the finals moved to another place. The Opening Ceremony was at the Donosti Arena, as the Fan Zone was; and the finals were at the Real Sociedad Sports Facilities.

The year after, in 2019, the Opening Ceremony came back to the Anoeta Stadium. The good atmosphere usually breathed in the Donosti Cup and the music and fireworks shows were a success cocktail. Not even the rain that we had from the afternoon could beat the excitement of thousands of young people that felt like stars for one day. As for numbers, all the records were beaten again. No less than 640 teams from 27 different countries participated in the 28 edition. Sierra Leona and Libano made a debut and Rusia and China came back. Moreover, 129 girls’ football teams played in the tournament, with the participation of the Champions winner club, Olympique de Lyon, apart from Benfica, Levante, Madrid CF, etc.

In the 29 edition the number of categories was extended, having the G10 category for the first time.