In 2006, the Donosti Cup gets in hands of the Basque Government the Award to the Best Sports Event of the Year.

The awards Euskadi to the Sports have the aim of promoting and developing the sports activity in our country. The mission of the Awards is to recognise the sports and human quality of people related to sports and spread these paradigms of values and sports excellence beyond the limits of the strict sports world, to get them to arrive to the rest of the society.

The solidarity task of the Donosti Cup was recognised in 2008 by Unicef with a national award for “its contribution to sports and the cultural exchange through integration and children and youth participation”.

The honour corresponds to the category “Sports in Favour of Childhood”. The Director of the Donosti Cup, Iñigo Olaizola got the award.

The Spanish Committee UNICEF Award recognise the engagement of people, institutions or groups that contribute to change the life of the most vulnerable children and to progress in the defence of children rights. We think it is fundamental to reward the work and effort of these people, groups and institutions that make efforts every day to make a better world for all of us, and specially for the most vulnerable boys and girls.

One year after, the San Sebastian town hall gave to the director of the Donosti Cup, Iñigo Olaizola, the Gold Drum, the highest award that the city can give. The award recognises those selling a good image of the city.

The Gold Drum is the highest award that the city of San Sebastian gives every 20th January, an event that takes place during the Childrens’ parade of Drums at the Town Hall, to a person, for his promotion of the image of the city and his professional achievements.

In 2016, the Donosti Cup gets a special award in the awarding ceremony of the 2019 Basque Tourism and commercial Awards, presided by the Lehendakari (1st minister of the Basque Country) Iñigo Urkullu. Up to today, only companies working on the tourism sector had been awarded, but in this occasion, The Tribunal decided to award a special award to the Donosti Cup because of its 25th anniversary.

As per the Basque Government said “we wanted to award the work made by the Donosti Cup from their beginnings in August 1992 as a sports meeting until becoming nowadays an undeniable element revitalizing tourism not only in the city, but in the territory also and one of the big events that contributes to the positioning of the Basque Country as a quality destination with a variety of products”. 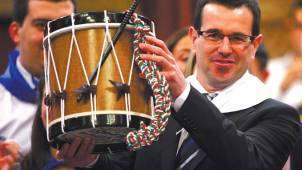